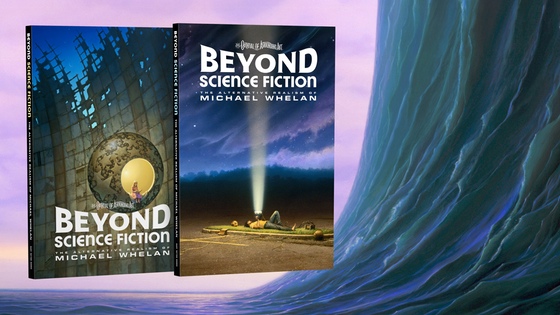 We've added some new original art rewards that were preliminary studies for major Michael Whelan paintings to be shown in the upcoming museum exhibition.

Seawall (Figure Study) This beautiful work of art provides vivid insight into the process Michael uses to conjure convincing worlds and their seemingly real inhabitants. He rarely uses models, but even when he does, he creates his own reference material to work from instead of using photos. This study of the young girl became the "model reference" he worked from while creating the central figure in his gorgeous painting SEAWALL. We hope you will come see it - and the painting at the Beyond Science Fiction show.

The Jacksons (Alternative Album Cover Concept) This is an alternative album cover concept painting for "Victory" by The Jacksons, one of the major works to be shown in the forthcoming museum exhibition. People Magazine reported that the Jacksons hired Michael Whelan because his style reminded Michael Jackson of early 20th century illustrator Maxfield Parrish. This large dynamic concept painting reflects Michael Whelan's desire to explore the themes of mysticism and the unity of the 6 brothers in the cover art.

Bone of Contention This painting based on a quote from a Stephen King novel was created for Baby Tattooville, a historic artist gathering which centered around the theme "Youth is wasted on the young." The painting is a stunningly executed meditation on human behavior that uniquely showcases Michael's affiliation with one of the greatest storytellers in modern history. This reward will come with several rare and valuable bonus items that were gifted to participants at the Baby Tattooville event... the backer who chooses this reward should be prepared for some awesome surprises!

And there are a few more originals available as of this update...

Accidental Alien Landscape This piece originated on Michael’s tabletop while he was painting DREAMSEEKER, the last piece he finished for a major gallery show. According to Michael, “I ended up fiddling for hours with the suggestive shapes in the spilled acrylics. I was too curious to see where it was going to stop myself.”

Can I Get a Witness This painting is the last piece available from Michael's "Signs of the Times" series. It is a mind-blowing mix of trompe l'oeil trickery and head-scratching ambiguity... a wonderfully provocative visual puzzle (which has to be seen in person to get the full effect of its reach-out-and-touch-it realism) that is more than just a conversation starter - it's an argument waiting to happen! Let the BB8 or B88 debate begin!

Mister Right He is a guy no one can ignore. Put him in any room and he'll become the center of attention. He's loose, organic and wild... a special specimen of a man(?) who showcases Michael's improvisational whimsy and his mastery of expressiveness.

We're halfway through the campaign, and there are more stretch goals on the horizon. Please encourage like-minded travelers to join us on our journey Beyond Science Fiction at AlternativeRealism.com.

To commemorate the Beyond Science Fiction campaign, and to celebrate the $50,000 stretch goal being reached, we're going to create a cloisonné lapel pin based on Michael Whelan's sigil and send it to all Kickstarter backers at the $10 or higher pledge levels when we ship their physical rewards. The pin - a first of its kind - is still being designed, but the specific colorway chosen for production will be exclusive to backers of this project. There may be other iterations of the Michael Whelan sigil pin in the future, but the Mark I version will designate the bearer as a member of the community that made Michael's inaugural museum show and companion book possible.

Almost simultaneously with blasting past the $50,000 threshold, we reached a whopping 500 backers; and the whole Beyond Science Fiction team decided we should do something special to thank the early adopters who have come on board the project. So...

Within the next few days, we'll be sending a separate message to the 500 backers who have already pledged at the $10 and higher reward levels. We will be asking for a mailing address to which we can send a holiday card. The card will be signed by Michael, and will feature the little "Astral Muse" Palette Gremlin painting that was offered as a reward when we launched the Beyond Science Fiction campaign. The card will be mailed before the end of the year (if we receive your address response in time), and it is our way of expressing our gratitude to everyone who has helped us travel beyond our wildest expectations.

So many generous backers have been drawn to this project in such a short amount of time! We are overwhelmed (in a good way) by the wave of support. Since we are exceptionally grateful, now seems like an excellent time to say, "Thank you!"

Hour 12: $30,000 Stretch Goal Unlocked - We added another 8 pages to the book layout, raising the total page count to 120. We also added "The Dark Tower: The Long Road" as a second signed mini print for all pledge levels $60 and above.

The Future - Energetic support inspires massive creativity. Thanks to you, while we're undertaking the design of this dream book, we're also dreaming up more rewards for the road ahead.

The sun is up on Cyber Monday, and before the sun sets we may be able to reach our next stretch goal. In fact, if we make it to $50,000 before 3:00 PM Eastern Time, we will have hit our fourth target within the first week of our campaign! But, regardless of the timeline, we are thrilled by the generous outpouring of support for this project.

And we're offering a few more original paintings as rewards. Each of these little gems highlights diverse aspects of Michael's work.

So, help us spread the word about Beyond Science Fiction if you feel inclined (AlternativeRealism.com), and expect a glimmering little update about our imminent stretch goal very, very soon!

Wow! That was fast! Each time we began to write an update about reaching a milestone, we reached another milestone.

First Hour: Campaign Funded - As way of saying, "Thank you," we're including the digital version of the Beyond Science Fiction book with all reward tiers.

Third Hour - $20,000 Stretch Goal Unlocked - We're going to embellish the covers of the various editions with special processes, and we're going to add 8 additional pages to the book.

The Future - Let's see where the next 29 days take us. Zoom!